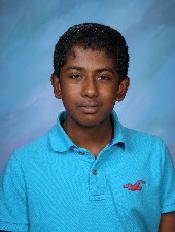 Congratulations to Ashish Kalkuntla who recently qualified for the United States Junior Math Olympiad. The top 230 students from 10th grade and below qualified and of that only 62, 8th grade students nationally qualified.

The annual Districtwide Survey for students, parents, and staff will be open from April 20 - June 4. The survey has been completely revised for the 2014-15 school year to align with District strategies and to be in compliance with policies and regulations adopted by the Board of School Trustees. The survey has been streamlined and now takes less than 10 minutes to complete.

The survey can be accessed at: www.ccsd.net/district/surveys
Read More »

Please click on the attachment for CCSD summer school Information for the 2015 school year. Any questions regarding summer school registration should be directed to your student's counselor.
Read More »

Congratulations to Ms. Weinstein and Shreya Kamojalla who recently participated in the state Geography Bee on the Friday before Spring break, March 27th, at Tarkanian Middle School. Shreya made it to the top 10 finalists and finished in 5th place. P
Read More »

Superintendent Skorkowski and the CCSD are sponsoring a student video contest for all K-12 students. Please see the attached flyers with information about the contest.

There will be an 8th grade BBQ at Western HS (for all incoming Western Warriors) on April 16th from 6-8 PM. The staff and administration of Western High School hope to see all their future students at the BBQ.

Each quarter the Hyde Park staff and administration will publish a newsletter to inform parents, students, and community members about upcoming events and recent celebrations at Hyde Park.
Read More »

Orchestra - was the first place performance group at a National Invitation only competition held in Salt Lake City.

Math Counts - Won the state championship and had 3 of the top 4 students in the state and will be competing at the Math Counts Nationals in Boston, MA.

Guitar - Won first place at Music in the Parks in Anaheim, CA

Band - Won first place at Music in the Parks in Anaheim, CA

Effective immediately Hyde Park staff will not be able to process early releases of students the last 30 minutes of the school day. Parents/Guardians wishing to pick their student up early from school must do so prior to 1:30 p.m. Parent/Guardian(s) will still need to provide proper identification and sign their student out from the main office.
Read More »

Attention 8th graders: If you are disciplined in the deans' office during the 2nd semester, you will not be able to participate in any 8th grade activities, which include but not limited to; the 8th grade field trip, 8th grade dance, 8th grade BBQ, etc. There will be no refunds either.
Read More »